Well….April has come and gone and it would be nice to say that Spring is now here but that would not quite be the truth. Unfortunately the woodstove still needs to be stoked and although the snow is all gone except for on the north side of things, the landscape is still pretty brown and dead. Enough of the weather.
Here in the barn we had another busy month with lots of new students and some incredible projects coming off the looms. Starting with local student, Susan Osterman's 10 yd warp of multi-stranded wool rugs, she set a new craze in motion and once other students had seen her rug, many wanted to weave something similar. Also, the overshot rugs from the previous month still continued to inspire and we had a few more versions of those coming off the loom. The multi-stranded rugs were originally inspired by Lynnette, master weaver for Eaton Hill, as a way to use up odd lots of wool yarn left over from other projects. She took 7 - 8 strands of a 3 ply carpet yarn and wound them together on a ski shuttle to create a very interesting color effect.  Besides being beautiful they are a great way to use up odds and ends.  In early April we had our neighbor, Betty Larsen, come with her daughter Kristina to weave and they were so captivated with Susan's rugs that they decided to weave some for themselves.


The next week of April brought Lisa Espenshade from Burlington who was here as a 50th birthday present to herself and in four days she wove a wool shawl, cotton dishtowel and made a warp to take home.

Other excitment this month was the acqusition of a new loom…which is technically Stevie's ….but she has decided to set it up here at the school so that we can all have a chance to use it. Her first project will be a 16 Shaft M & W pattern and then we hope to weave some fancy twill trims. 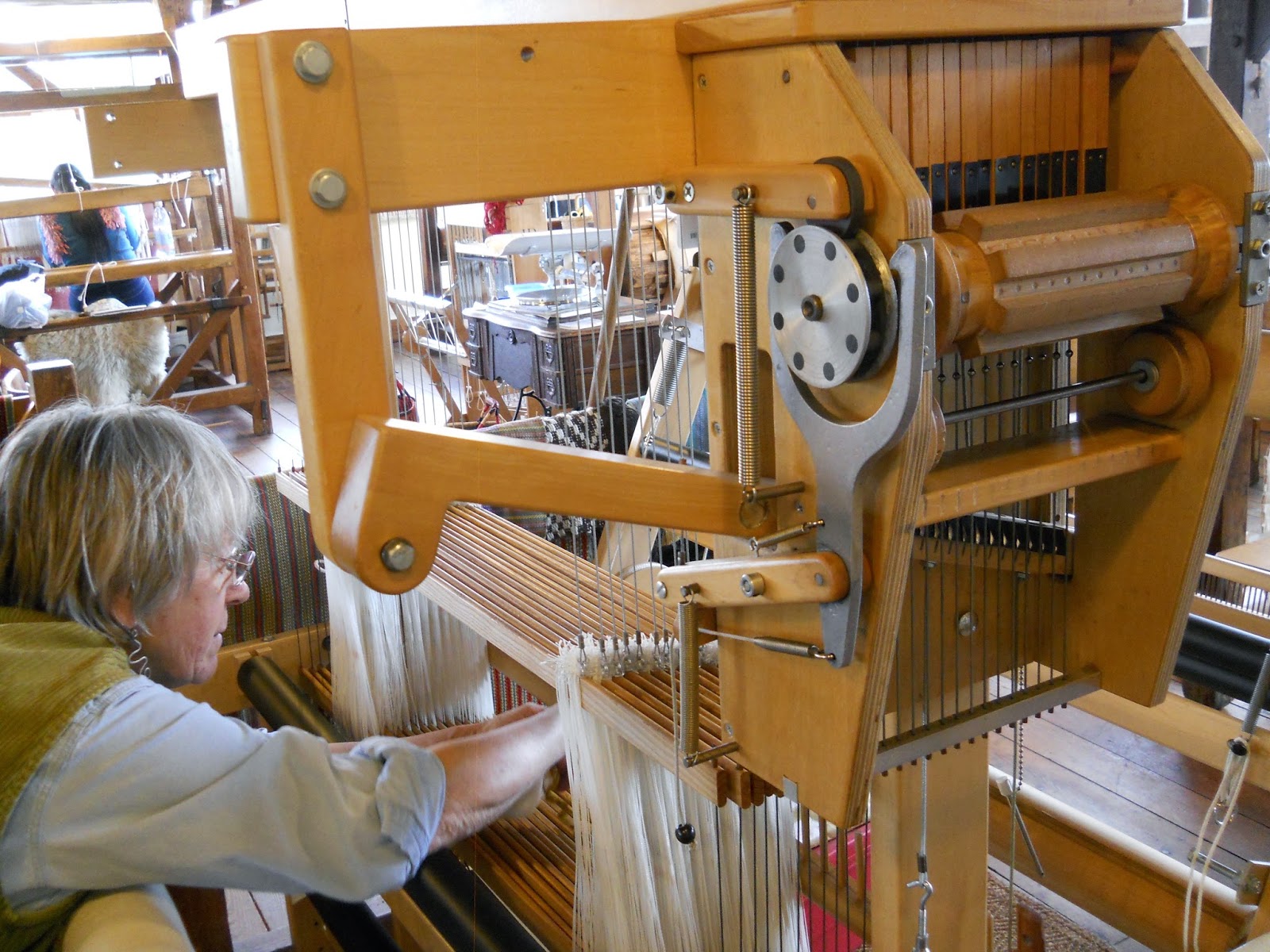 We had a surprise visit from Zoe this month to help us sort out the class schedule and lodging arrangements for the summer and while she was here Justin gave a little show and tell of all of his hand sewn period costumes. (We'll devote another whole blog to Justin's infamous costume collection!) Zoe's favorite was the well worn outfit from Plimoth.


Another special quest this month was Greg Sharrow from the VT Folklife Center who came to see Norman working on the warp weight loom before the loom headed off to Minnesota. Norman's student, Bruce Engebrettson, will be housing Norman loom there  and helping him to finish the blanket that was put on for the Folk Life Grant.


And then there was Marina…..
Former student, Marina Contro, from Brooklyn, NY, came back this month to be our second long term work study student. She wove lots of cotton dishtowels and alpaca throws for us and for herself, a beautiful organic cotton queen size blanket, an overshot rug and fine linen napkins. Another very successful work study relationship!