There's been a recent frenzy of dishtowel weaving, everyone getting ready for winter gift-giving and such. Many of the towels have been Jacques' Dishtowel Pattern (which we capitalize the spelling of because they have become a nearly holy thing around here).

It all started five years ago when Jacques Tremblay, one of Kate's students, wanted to weave a run of dishtowels for his house in France and to give as gifts to friends across the pond. He was inspired by a cottolin towel that Kate had designed which was kicking around the studio at the time. In his typical fashion, and true to his colorful french canadian background, he fashioned the prototype for what we now call "JDT" with bold colors and a distinctive twill pattern.
It's a straight twill that changes direction on the warp color changes, with a couple of interesting twists; one is that in the middle stripe of each wider band there is a herringbone, and the other is a very interesting section in the middle of the towel that is threaded as a straight twill, but is woven with two shots of one color, followed by one shot of another in sequence. Depending on the weft colors chosen, this section can be tremendously effective in creating an unusual pattern for the eye.
This year many of the local weekly students have made their own unique versions of this dishtowel, with some incredibly lovely results. It's taken some work to write up a draft based on Jacques' original design, mostly in counting the exact number of warp threads needed to create a centered herringbone in the middle of each stripe, but by now it's practically a yak route, so many students here have made their own.
Posted by alison at 7:19 AM No comments:

they really are so beautiful, our sweet little ginger babies.
*all handwoven products carefully inspected by our quality control team
Posted by alison at 4:49 PM No comments:

In Pursuit of Purple: Learning From Alkanet* 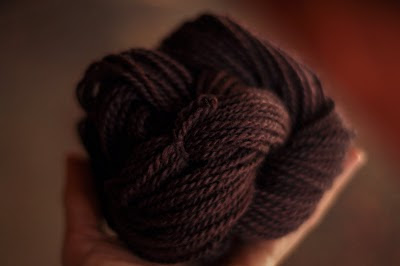 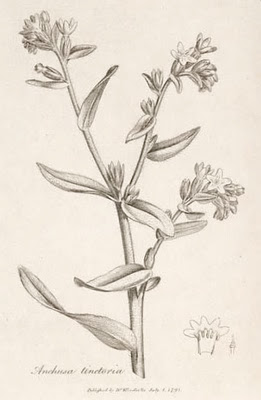 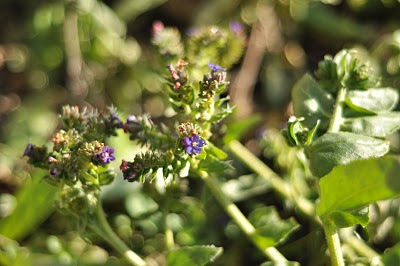 For over a year I've been watching a packet of alkanet seeds that sits on my shelf. That folded paper pouch with its line drawing of a sprawling, hairy-leaved plant represents the next step in my ongoing dye-garden dance.

I missed a few beats this spring, because at the exact time I should have been dibbling holes in six-packs of soil and sowing those Alkanna tinctoria seeds, I was finishing out my long-deferred bachelor's degree at Sterling College in my hometown of Craftsbury. Or perhaps I was only dancing in another set - after all, my final senior project dealt with using all sorts of natural colors from the plants already existing in my garden.

At any rate, those seeds never got started and I still haven't got alkanet established in my garden. I've vowed to start a flat next spring, but to further delay matters, alkanet's dye comes from roots, so I'll be waiting until my young plants are two or three years old before I first harvest their color.

Imagine my pleasure then, when I visited Kate Smith's group of natural dye students at the Twin Ponds Fiber Fest, and found well-grown alkanet plants for sale, right beside a basketful of cleaned, dried root, ready to make dyes! Grower Joann Darling explained that her plants were winter hardy at her Garden of the Seven Gables in East Barre and should do well in my Northeast Kingdom garden too. I bought two plants and two half-ounce bags of roots on the spot, and when I got home I proceeded to learn about dyeing with alkanet.

I turned to what I call my ABC's of dyebooks: Rita Androskos' Natural Dyes of the U.S., Rita Buchanan's A Dyer's Garden, and Karen Casselman's Craft of the Dyer. Between these three authors I can usually cross-reference an identification or a recipe if I find myself on unfamiliar ground. But all three failed to mention alkanet! So I looked further along.

Jenny Dean discussed it, mentioning in Wild Color that the red color was soluble only in rubbing alcohol, methylated spirits, or acetone, and that extracting dye in a water bath would yield grey, lavender, and purple. She also indicated that alkanet is sensitive to pH and mineral content in the water. Dean's recipe used a hot water extraction to obtain grey or purple on wool. Trudy van Stralen in Indigo, Madder, and Marigold, described using a small quantity of rubbing alcohol to aid the hot water extraction, and cautioned against steeping the roots overlong in alcohol. Her results on various animal fibers were quiet lilac-greys and beiges, not the strong purples or reds historically attributed to alkanet.

I decided to experiment with my two packets of roots, using one to make a hot water bath and the other for a solvent extraction. I emptied the first packet into a pint of tap water, noticing that the dried roots resisted wetting and formed a flat floating mat. The second packet I put into a pint of 70% rubbing alcohol, standard drugstore strength. Those roots immediately soaked through and sank to the bottom, trailing beet red spirals of color in the manner of a hibiscus flower teabag. I let both vats sit at room temperature for two days, mainly because I was too busy to dye until 48 hours later. I believe the water extraction didn't particularly benefit from the long soak, because the liquid was barely colored, similar to weak tea, until I applied heat to the bath just before dyeing and persuaded the roots to release substantially more color. The alcohol extraction appeared a dark red wine after the first 24 hours, and didn't deepen much further during the second 24 hours.

To make the dyebaths, I simmered the water extraction for an hour and strained off the liquor which was the color of strong but murky black tea. The alcohol I kept as a cool extraction - I strained the colored alcohol into a few quarts of hot water, but never directly simmered the roots.

I entered wetted, alum mordanted habotai silk, silk thread, and wool roving into the dyebaths, at a ratio of one part roots to two parts fiber (dry weight) which is half-strength, according to Jenny Dean's 1:1 recommendation. Out of respect to the silk, I kept the baths below a boil, at perhaps 190F. The alcohol bath's color struck quickly, within the first 10 minutes; the paler lilac silk was entered just 10 minutes after the first, darker silk, the silk thread, and the purple wool, but the color on the pale silk represents a nearly exhausted vat. The beige silk and the grey wool resulted from a vat of two quarts of water plus the liquor strained from the hot water extraction. That color likewise seemed to strike quickly - after the first ten minutes, the fiber did not noticeably take on more color.

I let both vats simmer for about a half an hour, then turned off the heat and left the baths to cool somewhat. When I rinsed the alcohol vat's fibers in hot water, my fingers turned purple and what seemed like a lot of free purple color flushed from the fiber. It did lighten somewhat with the rinse, but there was sufficient color left to declare 'purple'. The alcohol smelled very strongly at first but soon rinsed away. The dry wool has a slight bit of tack or residue, and leaves purple marks on my skin - this may mean inadequate rinsing, or it may be the nature of solvent extracted color, which more testing might determine.

The fiber from the hot water extraction rinsed out cleanly and quickly. The wool roving, however, as promised by Jenny Dean, turned a lilac-grey and even had a few streaks of purple. My alum mordant bath was hastily done immediately before the dyebath, and I suspect the wool did not mordant evenly, hence the streaks.

From the dyebook research, I know that alkanet is susceptible to many of the usual dyer's variables: pH, water hardness, different mordants. That's one possible reason for the unpredictable results from different dyebaths. But when I looked in botanical references, I found more potential for differences. Alkanna tinctoria is a common dyebook classification for Dyer's Alkanet, what my horticulture books call Anchusa tinctoria, of the Borage family. Anchusa is the genus commonly called Bugloss, familiar in the world of garden ornamentals. Within Anchusa are many species and cultivars...and this leads right back to my reason for purchasing that little packet of seeds: if I grow my own dyestuffs, I can guarantee the material from the right plants goes into my dyepot.

My alkanet experiment has temporarily slaked my impatience with those little neglected seeds on the shelf, and ha posed some questions for further exploration: for instance, how can I get the red color I read about? How would dry gas (methyl alcohol) compare to rubbing alcohol (isopropyl)? Are the colors lightfast? (This test is underway on samples of wool right this minute, on my windowsill.) Are the colors washfast? How will after-mordants or top-dyes affect the way the color rubs off the wool? Is this a better way to get purple than my current method, which is top-dyeing ammonia fermented lichen pink with japanese indigo?

Perhaps you will know some of these answers. Perhaps we'll discover them together, at one of Kate's amazing natural dye workshops. Perhaps we'll never know - but let's keep on trying, and keep on dyeing!

photos from top to bottom: