While this hasn't been a "typical" winter as far as snowfall goes, nobody seems to be too upset about it. We've had less than average snowfall, and perhaps more freezing rain and sleet than snow, and much milder temperatures on the whole. The driveway has been more like a skating rink than a snow fort. But in some ways it's a nice break, especially after all the snow and deep cold we had last winter.

We had a busy week...Lynnette has been occupied with winding spools for a big warp. Zoe finished up her roll of canvas over the weekend, and we had a big potluck birthday lunch for her: soups, salad, roasted potatoes, homemade applesauce, kale chips, with raw jersey milk, gluten-free compost cookies, green tea ice cream, and poppyseed pound cake for dessert. We always have a great time with birthday lunches and festive occasions around here...a lot of us like to cook and we enjoy making and sharing the things we love to eat. It helps to also have access to great local foodstuffs here in Vermont. So Zoe had a good send-off. It seems the month of January slipped by so quickly while she was here.

But the looms have been busy. Susan O has been finishing up a really nice twill blanket in Jaggerspun wool...she has such a great sense of color, and her work is always easy on the eyes and easy to imagine living with.

Stevie has been weaving a run of very brightly colored birdseye dishtowels in 8/2 cotton, playing with color relationships, which are always more challenging when most of the colors are bright ones.

Sandra has an uncharacteristically BRIGHT warp on for a wool/alpaca throw for a young relative of hers who requested certain colors that Sandra probably would never dream of putting together! So it is one of those exercises in working with colors that are not your own, and working on a project where what's going on is not necessarily pleasing to your eyes. An interesting experiment for all of us to witness!

Susan W has been working on some short warps to become more comfortable with the process of warping, beaming on, and all the set-up. Her most recent project is a 4-towel cotton dishtowel warp, and she's putting in some other color (reds) than is her usual way (neutrals).

There's been a short rug warp on to weave up a few samples using the new carpet yarn from a local sheep farmer's Romney and Border Leicester wool. Last summer Zoe skirted some 300# of assorted fleece from Bill's sheep and sent it off to Green Mountain Spinnery in Putney VT, who made beautiful yarn out of it. Kate dyed enough for this warp so that we could see what a finished product would be like, Lila wove them off on Wednesday, and we have to admit, we love the results! The new yarn is soft, durable, and takes the dye color so beautifully.

I've been socked in with tape projects lately...I finished up the last of four 7 yard warps of undyed wool galon for St. John the Divine's Textile Conservation Lab in mid-January, and then started right in on another project = 14 yards of heavy linen strapping for the Fort Ticonderoga Museum, to be used in the reproduction of some military satchels. It's very different from the galons, as the warp is stretchy and finicky and we've had to rig the tensioning of it a bit differently than we might on a shorter warp. But it's fun...having been admonished so continuously to watch my selvedges by my mother when I wove as a young girl, I somehow find this particular challenge to be very enjoyable on tapes.

And last, but certainly not least, Stephanie has been here from Old Lyme, CT for a week of setting up and weaving overshot. She is an experienced weaver, having expertise in several arcane specialties, such as Tibetan rug weaving. She has a huge 12' wide Glimakra at home that she's been weaving the most FABULOUS rag rugs on...which she brought out for a show-and-tell on Thursday, much to everyone's delight. This week was her first experience using a traditional barn frame loom, end delivery shuttle, and tenterhook, in addition to the whole process of learning to weave overshot. What a lucky dog...she can weave overshot coverlets on a 12' loom without having to make two pieces whose pattern sequences have to match up to be sewn on a center seam! It's been great having you here working with us, Stephanie, and we look forward to seeing what you'll come up with in your further adventures with overshot projects.

We've been lucky this month...Zoe Sheehan is back for three weeks of intensive project work...she's here on her winter semester break from her teaching job at Baruch College in NYC to help us get a complicated plate design made for a new fabric embossing job. So we have the exquisite pleasure of enjoying her rapier-sharp wit and intelligence, while we spend hours poring over photographs, surface design books, and the computer, extracting the visible pattern from original fabric belonging to the drawing room collection of the US State Department, and then working with our design motifs to create camera-ready art to go off to our plate manufacturer.

But that's not all she's here for...in between bouts of computer work, she's been playing with an indigo discharge print of a standard bandana paisley on cotton fabric, and setting up and weaving off sixteen yards or so of cotton canvas for a dropcloth. Just that. (She's ambitious about the most off-beat kinds of things - during previous visits she's been known to weave reproductions of 49 - cent Ikea dishtowels, fine cotton twill tape to bind a cotton mop head with, samples of 3/1 twill indigo denim, and to single-handedly skirt 300 pounds of raw fleece.)

Our visits with her seem always to go by way too quickly. She's been here since January 3rd and will be leaving on the 24th...three weeks disappeared in the blink of an eye. It's a great way to get through a big chunk of winter...we have a pile of fun and get a lot of work done...because she's such a great studio person.

Thanks for everything, Z. We can't wait for you to come back.

Happy New Year....and how we spent our Christmas vacation 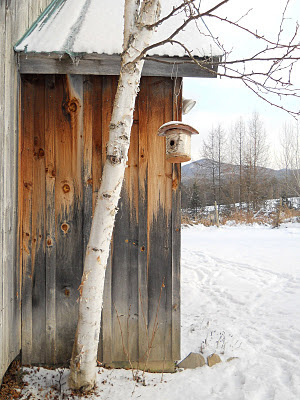 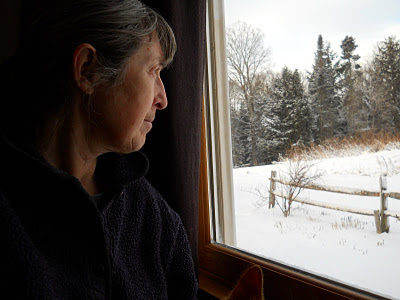 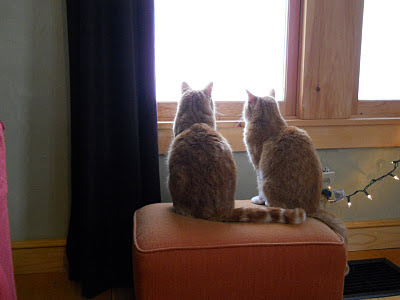 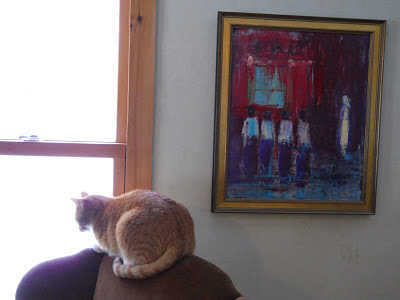 Happy New Year's greetings to all! After such a busy year here at the school we all decided to take some time off over Christmas to recharge our batteries and to reflect on the past year. It was a well deserved rest and speaking for myself, a wonderful time to just stay at home with my beloved cats and be quiet. The four of us spent alot of time just looking out the windows watching the snow fall down or the turkey's hunt for food. Or sitting by the woodstove drinking tea and reading. No matter what I was doing there was always at least one cat by my side...it was heavenly! And now we are back to work and ready to start another year. Many of you received our latest newsletter with highlights of the past few months and some of our plans for the future. We have lots of exciting classes scheduled with the new twist of theme weeks and the local students have some new projects of their own to dazzle us with. Eaton Hill also will be busy in the next few months as we work on another embossing job and a reproduction piece of calimanco for Colonial Williamsburg. Come spend some time with us this year if you haven't already! There is a charming apartment at my house that is perfect for student use and within walking distance to the school. Thank you all who made last year such a success! Kate
Posted by kate smith at 11:17 AM No comments: